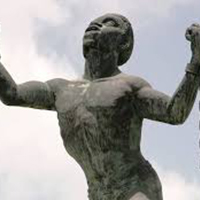 Barbados became an English colony in the mid-seventeenth century. It was an important producer of sugar cane and needed laborers, that meant many slaves were brought from Africa to work on the sugar plantations.

In 1807, the trading in slaves was abolished in the British Empire but not slavery itself.

The largest rebellion in the island’s history took place in 1816. The rebellion involved twenty thousand slaves from over seventy plantations. Although fighting for their freedom, the revolt failed and 120 slaves were killed in the fighting and 144 were executed following trials. The revolt was led by the Bussa, the head driver on Bayley’s Plantation in St. Philip. Bussa died in the fighting and became one of Barbados’ national heroes. His statue now stands at Emancipation Roundabout on the island.

Slavery was finally abolished throughout the British Empire by the Slavery Abolition Act 1833, which came into effect on August 1st, 1834.